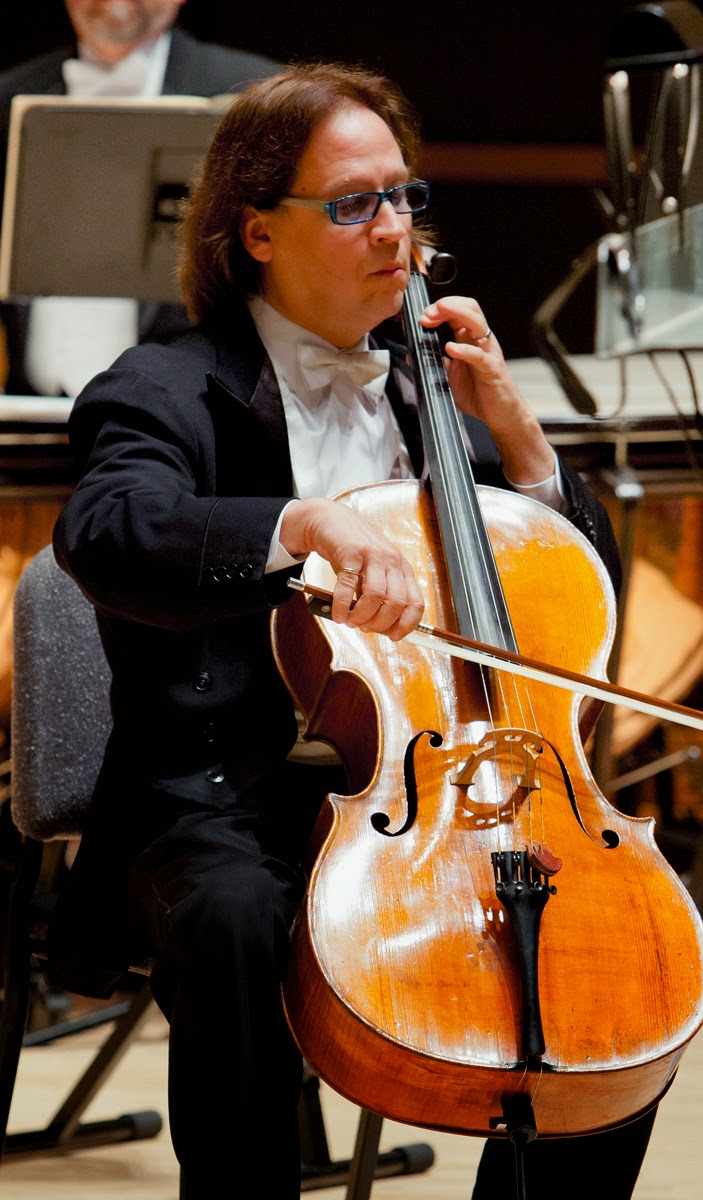 Earlier this concert season, the VoxAmaDeus e-newsletter carried an interview with Vivian Barton Dozor, the ensemble’s first-chair cello. [See Vivian's interview here.] Now, here is an opportunity to get to know the stalwart companion who sits at her right hand: cellist Anthony “Tony” Pirollo, an Italian-American who hails from South Philly and now lives around the corner from Walter Annenberg’s old estate!

RAS:    Tony, let’s start at the beginning. Where did you derive your love for music?

AP:    The surprising fact is that no one in my family was highly musical! My mother liked to sing pop songs. My father liked opera, but I hated the records he played. But from an early age I began to show a fondness for pop music on the radio.

RAS:    So with no major musical role models at home, where did you begin to demonstrate some musical skills and take lessons?

AP:    Like so many other kids, I really first encountered music thanks to the Philadelphia Public School District’s much maligned—and woefully underfunded yet incredibly successful—music program in elementary school. That was back in the mid to late 1960s.

I attended Sharswood Elementary School in South Philadelphia. At Sharswood I was introduced to the cello when I was eight years old, in third grade. Funny to relate, the cello was my first and only love; I didn’t want any other instrument. And for some strange reason, Sharswood only had full-sized cellos for us little kids to play on. But I was big for my age, which was a good thing. As I recall, we cellists were selected by height more than aptitude. Apparently I had both, and was able to play the full-sized instrument.
RAS:    When I talk to your VoxAmaDeus colleagues I usually ask about their first teachers, the women and men who gave you the start that led to your love of music and a professional career. Who were they?

AP:    My first teacher was Mr. Joseph Capozio; his instruments were the cello and the bass. I was with him until twelfth grade. The other teacher who was very, very influential was Mr. Alex Wilson. Alex is now 93 years old. He attended The Curtis Institute of Music as a trumpeter, was enrolled at the University of Pennsylvania, and played professionally in the Buffalo Philharmonic. But a problem with his embouchure made him retire from the orchestra and become a life-long teacher of music. Mr. Wilson’s misfortune was our gain. He was tremendous.

Another very important teacher for me was the Sharswood Elementary principal, Ms. Rita Brown. Ms. Brown went on to create the “music magnet school programs” for the School District of Philadelphia. I remember it was she who insisted that I play the cello.

It is important to remember that these were especially tough times for music education in the Philadelphia public schools. In the early 1970s, when I was in the seventh to ninth grades at Horace Howard Furness Junior High, the music program was slashed and then eliminated. On top of this, peer pressure—and living in a pretty rough neighborhood—almost stopped my musical activities in their tracks. But for some reason I felt compelled to play cello. Things were a mess until the music program was reinstated when I was in ninth grade.

It wasn’t until I went to South Philadelphia High that more regular and focused musical studies began to take place. Fortunately, Mr. Alex Wilson was still there to teach us. Every day, a group of music students stayed with Mr. Wilson, usually for about three hours after school. He taught us harmony and general music, and he introduced me to the Bach Cello Suites. And he taught us for no pay!

With Mr. Wilson, our group of musicians played music while other kids got involved in more questionable activities! The school environment was dangerous, but I wouldn’t exchange it for anything else. The fact is that until I went to college at the Philadelphia Musical Academy, I was basically self-trained. But I had a lot of innate ability. In fact, I believe that the Philadelphia Musical Academy accepted me on potential. I had this burning intensity inside not to fail or embarrass myself. But when I arrived at PMA, because of my limited experience, I thought the college did not have an acceptable cello teacher. I was about to transfer out due to this seemingly inexplicable lack when good fortune struck, and the famous Philadelphia Orchestra violinist William de Pasquale took me under his wing.

Mr. de Pasquale would pick me up in South Philly, drive me to his house in Penn Valley, teach me for three hours, and then drive me home. For several years, he refused to take a fee from me. Now, when you are with a man like that, you cannot let him down. He was a huge musical influence. He gave me a fabulous work ethic. He also taught me the responsibility of teaching others. He wanted me to call him “Bill,” but for many years I could not get it past my lips. We grew very close, and Bill played the “Meditation” from Thaïs for my wife’s wedding processional.

RAS:    Who were some of the other influential musicians with whom you studied?

AP:    When I was in my thirties, I finally had coaching sessions with the renowned violinist Jascha Brodsky, the Curtis alumnus and faculty member who helped to create the New School of Music in Philadelphia.

I love to compose for the cello, and while at college I developed this skill thanks to Theodore Antoniou. I was in his New Music Group at the Philadelphia Music Academy. Studying with him helped me quickly develop the theoretical knowledge that would lead to my understanding of composition in all its forms.
Now this may sound ironic, but about twenty-five years ago I helped co-found the Bel Canto Lyric Opera Company with Madame Marianne Casiello. And that gave me an impetus to conduct opera—and you will remember that I said I hated my dad’s opera records! The first opera I conducted was Gustave Charpentier’s Louise!
After college I decided to become a freelance musician; I was not interested in playing full time in an orchestra. The idea of being in one place for a long time did not appeal to me! But having said that, it is now about twenty years that I have had the great pleasure of performing with Valentin Radu and the orchestras of VoxAmaDeus.

RAS:    Hold that thought, but let’s switch gears. Tell us about the cello on which you perform.

AP:    For music composed after the Baroque era I use two different instruments. I perform on a cello crafted by Lockey Hill (1756-1810) of London. He hailed from a family of famed English string instrument makers. I also have a modern cello crafted by Sergio Peresson (1931-1991). He was a very famous modern violin and cello maker who worked in William Moennig’s shop right here in Philadelphia.

A short list of the great musicians who have owned the instruments he created includes Isaac Stern, Jacqueline du Pré, Mstislav Rostropovich, Yehudi Menuhin, Norman Carol, and the de Pasquale family, including Bill. The Lockey Hill and the Peresson cellos have completely different sounds. However, for VoxAmaDeus I have a Baroque cello, loaned to me for about the last twenty years by my stand partner, Vivian Barton Dozor!

RAS:    How did you learn to make the transition from playing a modern cello—with its familiar metal strings, A-440 tuning, end-pin and bigger sound—to a Baroque cello?


AP:    Pretty much the best answer I can give you is that it was basically done by sheer panic, plus a lot of blood and sweat! By the way I'm still making that transformation. I am always learning and, hopefully, getting better.

RAS:    So, I must ask, how did you meet Valentin Radu and VoxAmaDeus?

AP:    Sometime in the mid 1990s, Vivian Barton Dozor got me involved with Vox. Prior to that time, I hadn’t played Baroque cello. She was an invaluable help—to say the least!

My debut concert with VoxAmaDeus and Valentin Radu was Bach’s B-Minor Mass! First Vivian arranged for the loan of both a Baroque cello and a Baroque bow. But I had no clue about how to play the Baroque cello! Gut strings, tuning one-half step lower than modern concert pitch, and holding the cello between your legs with no end-pin are the polar opposites of the modern cello. Making a good sound without squeaking was a difficult and scary experience. But there is a certain purity of sound that comes with the lower pitch, the gut strings, and the lack of vibrato. All this makes for a more pure sound. Somehow it all worked, and I’ve been back ever since.


Buy tickets to Vox's B Minor Mass performance in Wayne

RAS:    What makes the VoxAmaDeus performing experience different from that of other ensembles with which you perform?

AP:    Let’s begin at the top. There is consistency on the podium with Valentin Radu’s firm leadership. I really applaud his repertoire choices—performing the very best of the great works for orchestra, or orchestra with chorus and soloists. And he selects a large range of music—from the Renaissance and into the last century—finding new works to perform. For example, for performance last season, he made the adventurous decision to pair the less familiar Stabat Mater setting by Rossini with the famed Mozart Requiem. That was a memorable evening of great music making. And just last month Maestro Radu afforded our audience the rarest of musical opportunities when he conducted the fabulous pianist, Peter Donohoe, in the regional premiere of the Aaron Copland Piano Concerto. What a wide ranging span of repertoire we VoxAmaDeus musicians get to play. It is never boring!

Also, there is something I should say about our multiple performances of Handel’s Messiah every December. The musical notes—except for the soloists' embellishments, let’s say—are the same. But every year, the music evolves as our Maestro finds fresh ways to interpret this fabulous score! This keeps you on your toes.

And I really enjoy the special camaraderie there is among the VoxAmaDeus musicians. Everything has a “chamber” feel, a more intimate, family-type atmosphere.

RAS:    Do you have any favorite composers and their music?

AP:    Anything by Johann Sebastian Bach. My take on Bach is simple: just play the notes, and let Bach’s musical GPS help you unlock the music.

And I must confess that before college I fell in love with the music of Anton Bruckner. At a flea market I found 33-rpms of Bruckner’s Seventh Symphony and the Mozart “Jupiter” Symphony. I had never had an introduction to this music previously. Then, when I was in twelfth grade, by sheer coincidence Mr. Wilson got me a ticket to the Philadelphia Orchestra when Claudio Abbado conducted both Mozart’s “Jupiter” Symphony and Bruckner’s Symphony No. 7. This was a life-altering experience!

As far as other influences, I have a love for many types of music, especially the heavy metal genre of rock-and-roll, specifically the early 70s and Black Sabbath. What intrigued me was that the music seemed to come directly out of the period of Vivaldi, Corelli, etc., the basic difference being electricity! Just listen carefully—it is modal.
at 10:50 AM
Share
‹
›
Home
View web version