On Friday evening, January 16, 2015, at 8:00 p.m. in the Perelman Theater of the Kimmel Center, Valentin Radu will lead the orchestra of the Ama Deus Ensemble, and special guest artist British virtuoso pianist Peter Donohoe, in a rare performance of a largely overlooked (and at its debut, critically disdained) early masterpiece from the musical genius of Aaron Copland. In fact, research bears out that this will be the actual regional premiere of a major composition by a young Aaron Copland!

We find ourselves in a situation of mixed emotion: this concert has completely sold out! Being in the position of disappointment that we have no more seats to provide our friends and fans is a rare and humbling experience. Whether you have tickets or not, you can tune in to WRTI radio, FM 90.1, or listen to the live web stream at wrti.org, on Saturday, January 10, at 11:30 a.m. Jill Pasternak of WRTI interviews Maestros Peter Donohoe and Valentin Radu on her nationally syndicated radio show, Crossover.  They discuss Maestro Donohoe’s upcoming visit to Philadelphia and insights on the Copland Piano Concerto. Don’t miss it!

The work, Copland’s jazz-inspired Concerto for Piano and Orchestra, was written during 1926. With Copland at the piano, it was performed on January 28 and 29, 1927, by the Boston Symphony Orchestra under the baton of its famed maestro Serge Koussevitzky, who had inspired Copland to compose the concerto. The same artistic forces took this work to Carnegie Hall about a week later. The reactions of the audiences were mixed (to say the least), as were two press reviews the VoxAmaDeus staff have located.

The history of the Copland Concerto has a “Philadelphia connection”. Here’s the backstory:

On January 12, 1921, Russian-Jewish immigrants to Philadelphia Mr. and Mrs. Kalmon Smit welcomed into this world a baby boy they named Leo. As he would later relate, the Smit family “lived over a Chinese laundry.”

Leo’s father, Kalmon, was a professional violinist. Judging by the conductors who hired him, and the orchestras of which he was a member, Kalmon must have been rather good. His musical bona fides included stints with Leopold Stokowski in the Philadelphia Orchestra; Fritz Reiner at Cincinnati, and Arturo Toscanini in New York with the NBC Symphony Orchestra!

Young Leo, also, must have been quite the musical prodigy. In 1929, at about age eight, his mother took him back to Mother Russia to study piano, on scholarship at the Moscow Conservatory, with the famed composer Dmitri Kabalevsky. Then back in Philadelphia about a year later, the nine-year-old lad was accepted by the Curtis Institute of Music to study with the redoubtable piano pedagogue Isabelle Vengerova.

Fast forward to 1936: At age 15, Leo Smit was hired as a rehearsal pianist for the Metropolitan Opera House’s ballet, then under the direction of famed choreo-grapher George Balanchine. This job afforded Smit the opportunity to meet and work with Igor Stravinsky when the composer’s ballet Jeu de Cartes was in rehearsals for performances in April 1937!

Leo Smit first met Aaron Copland, in New York City, in 1943. Of his own volition, Smit diligently prepared Copland's demanding Piano Sonata. Then, when convinced he was ready, Smit had the chutzpah to arrange to meet Copland and play the piece for the famed composer, who was a brilliant pianist himself. Fortunately for Leo Smit, Copland was impressed with his musical interpretation and pianistic abilities. The two quickly developed a friendship that lasted until Copland's death in 1990.
Later in 1943, Copland introduced Smit to Leonard Bernstein, who also had Curtis credentials. This meeting occurred at Carnegie Hall during a concert when Smit was turning pages for Béla Bartók during a performance of Bartók's Sonata for Two Pianos and Percussion.
Now let’s fast forward to October 1946. Picture the young and dashing Leonard Bernstein on the podium and Leo Smit confidently seated at the piano, as the first U.S. performances—in nineteen years—of the Copland Concerto for Piano and Orchestra are presented by the New York City Symphony. It is interesting to note that all previous performances (including the unsuccessful world premiere*), had featured Aaron Copland as soloist. Of this revival, Copland wrote:

"Lenny and Leo handled the rhythmic complexities of the Concerto with ease. Leo is a far better pianist than I − I had played the work like a composer, while he was a dazzling performer with enormous vitality and yet he kept everything absolutely clean and precise."


Let’s travel 34 years forward to November 14, 1980, on the night of Copland’s gala eightieth birthday celebrations. These same three artists (plus Mstislav Rostropovich) appeared together on the main stage of the Kennedy Center in Washington, D.C. But that night, with Leo Smit at the keyboard, it was Aaron Copland on the podium to lead his good friend in a performance of his jazz-inspired piano concerto that had received such a negative reception more than a half-century before. 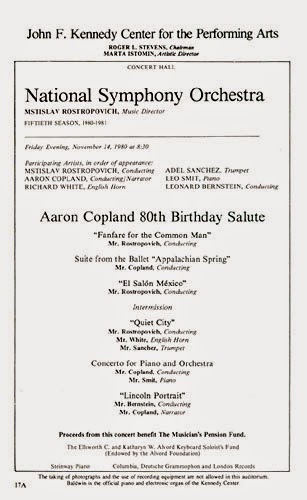 The world premiere of Copland’s Concerto for Piano and Orchestra, composed during 1926, was commissioned by Serge Koussevitzky and premiered by the Boston Symphony Orchestra on January 28 and 29, 1927. A week later, these same artists performed the work in New York’s Carnegie Hall. Truth be told, in both cities the Copland Concerto met with mixed public receptions, as well as pointed pro (and rather heavily) con comments from the critics, one reviewer being the famed musical commentator Olin Downes. 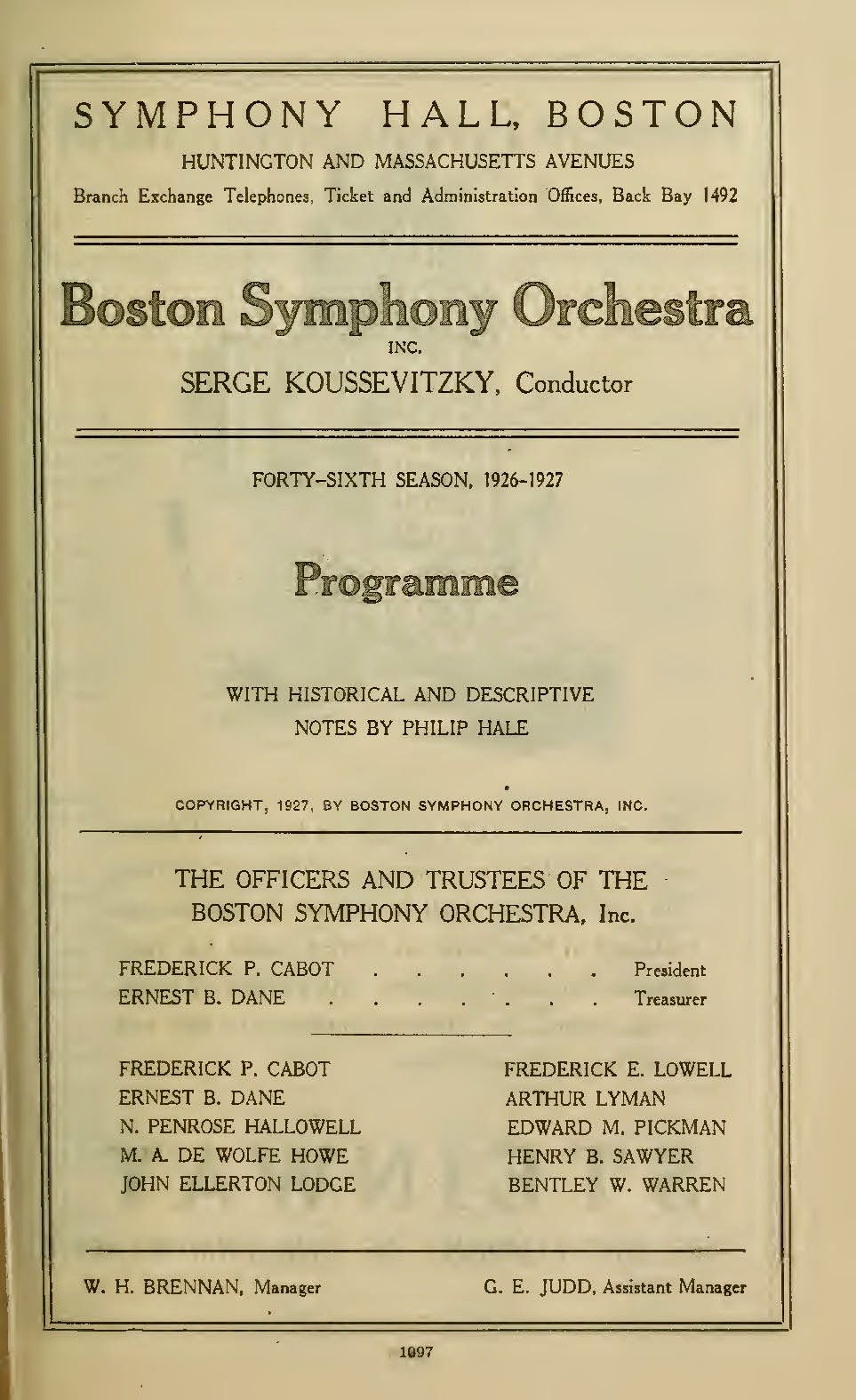 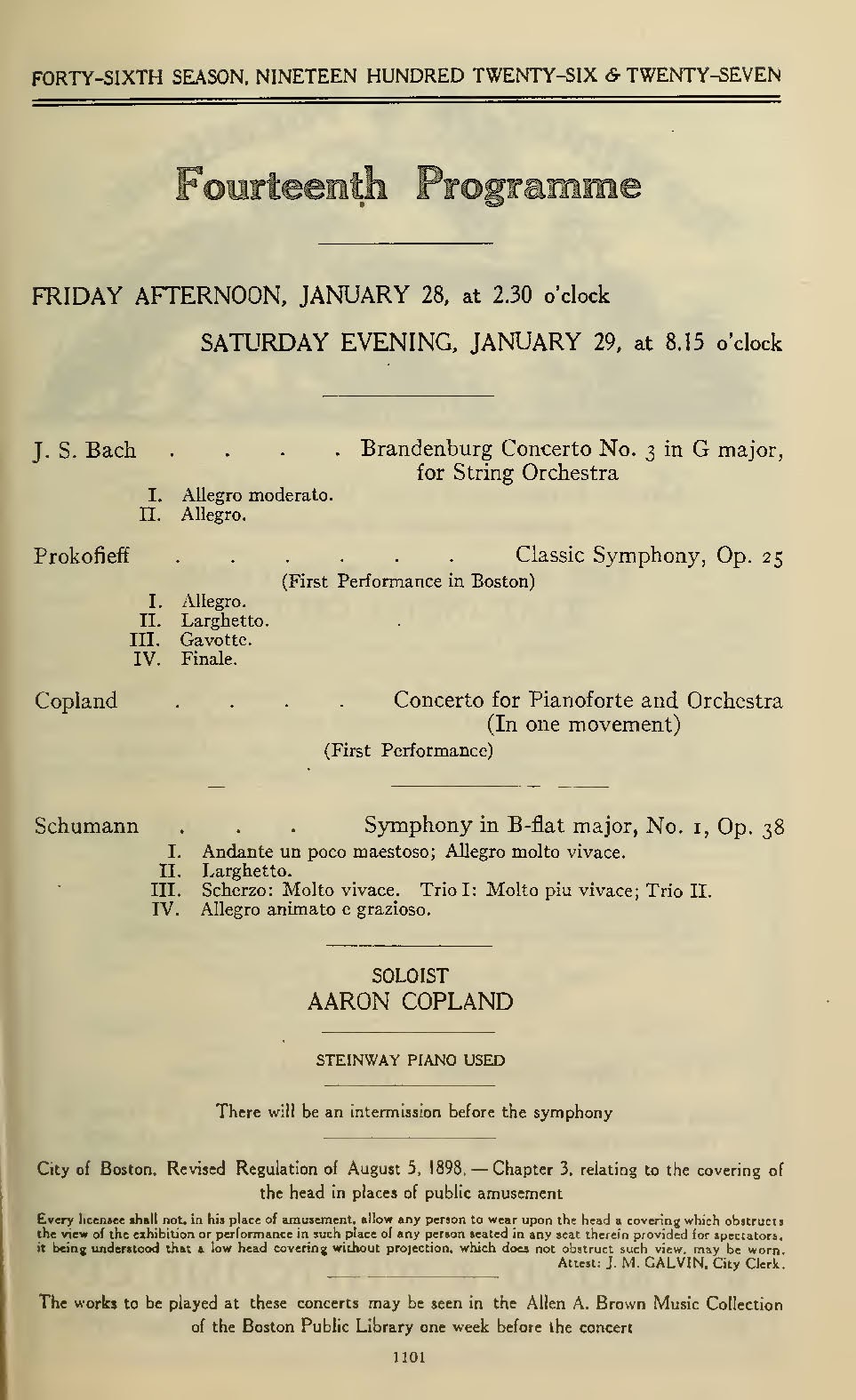 A note about Copland & jazz: During 1926, Copland worked to compose a jazz-influenced Concerto for Piano and Orchestra. Although Copland was very cognizant of the American jazz scene, it is interesting to note that his approach to jazz also had been strongly influenced by European composers, especially the Vienna jazz scene.

Note: Much of the biographical information about Leo Smit, and other factual information in the above was drawn from a web-article written and posted by the University at Buffalo, the State University of New York. Leo Smit had been a member of that University’s faculty for many years. Photographs of Aaron Copland and Leo Smit courtesy of Nils Vigeland on behalf of the Leo Smit estate.
at 3:15 PM
Share
‹
›
Home
View web version