Friday, April 3, at 8 pm in the Perelman Theater
at the Kimmel Center for the Performing Arts


The High Mass in B Minor is Bach's crowning achievement—his musical testament—was written over a twenty-year period and never performed during his lifetime. It was discovered by Mendelssohn one hundred years later and performed then in Leipzig's St. Thomas Church, where Bach spent his last twenty-seven years as its most prolific and famous organist, Musikdirektor and Kapellmeister.

We now invite you meet two new soloists for these concerts. 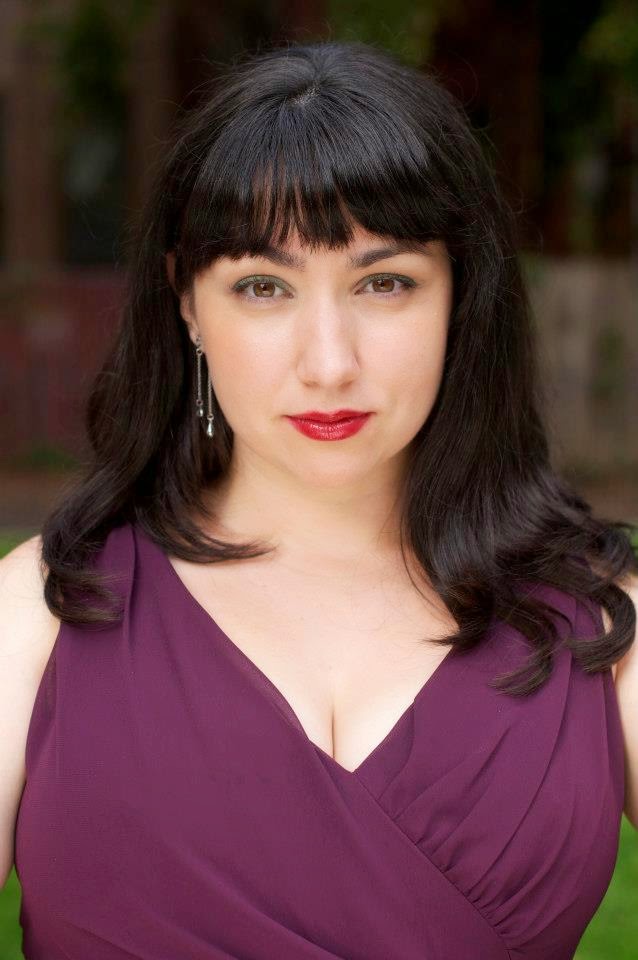 Karina Sweeney is an exhilarating lyric mezzo-soprano who hails from Annapolis, Maryland. About four years ago, she and her husband, David (a computer engineer and a tenor!), made the Philadelphia area their home, and then welcomed the birth of a daughter, Keira. Today, as Karina prepares to sing the artistically challenging mezzo-soprano solos from J.S. Bach’s monumental Mass in B Minor with Valentin Radu and the Ama Deus Ensemble on Palm Sunday, March 29, in Saint Katharine of Siena Church in Wayne, she and David are once again preparing for a new arrival! So, while Karina still has some time for the normal—but actually abnormal—life of a professional singer, we sat down with her to go over the highlights of what went into her career-building process.

My life has been full of music. I began piano lessons when I was seven. I added the violin at eight and the flute at fourteen, and played them until the end of high school. I began serious voice lessons at fifteen. A few years later I enrolled at Towson University near Baltimore as a music major, with a concentration in vocal studies. At Towson I was fortunate to study with Leneida Crawford. Then, after my undergrad studies, like so many kids with a bachelor’s degree, I took some time off from formal studies to get a paying job, in my case with Apple in retail sales and tech support. But I continued vocal training with Ms. Kyle Engler, and later enrolled in a Masters in Voice program at West Virginia University. I got married on June 19, 2010, when I was twenty-five. Very soon thereafter I entered an advanced training program in the craft and art of “how to audition” called CoOPERAtive that was being offered at Westminster Choir College in Princeton, New Jersey.

Frankly, I found the classical music scene in Baltimore too small and limited. So, during the merry month of May 2011, after finishing graduate studies in West Virginia, I came up to Philadelphia. But, just my luck, I arrived after the usual auditioning period—and I was pregnant, due in August!

Fast-forward to this coming autumn: As part of the Fringe Festival, I will be joining Opera Philadelphia and the Bearded Ladies Cabaret as a soloist in their joint, world premiere of Andy: A Popera. This is a cabaret-opera hybrid inspired by the life, fame and philosophy of Andy Warhol. This work has two composers, one who specializes in writing cabaret music and another who is more opera-oriented!

Now, my connection to VoxAmaDeus was through a Vox soprano friend, Emily Eisen. She had sung with the group and told me I must audition for Maestro Valentin Radu. So when auditions were announced for the spring of 2012, I signed up. As I recall, they were held in the beautiful, bucolic little Presbyterian Church in Gladwyne. Maestro Radu offered me a contract, and I began singing with the VoxAmaDeus chorus that next season. What I found so exhilarating was the opportunity to sing major choral works that had somehow been overlooked during my collegiate training.

Then, last November 21, 2014, I was thrilled to perform as a soloist with Valentin Radu and the Ama Deus Ensemble orchestra and chorus in the Kimmel Center! That concert featured several scenes from Mozart operas. I sang as Dorabella in the famous quartet from Così fan tutte and in a quartet from Mozart’s less-familiar opera seria, Idomeneo.However, the upcoming March 29 performance of the Mass in B Minor will mark my first true solo performance with Maestro Radu. I am thrilled to have this opportunity to perform some of the greatest music ever composed, and to do so in the uplifting venue of the sanctuary of St. Katharine of Siena Church. Thank you VoxAmaDeus and Maestro Radu! 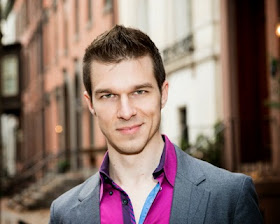 A native of Cecilia, Louisiana, not too far from Baton Rouge, André Courville attended Loyola University New Orleans on scholarship as a vocal performance major. Mr. Courville has been praised by Opera News for his “splendid, lush bass-baritone.” He is the recipient of numerous awards, including district prizes and two consecutive second-place wins in the regional competition of the Metropolitan Opera National Council Auditions, as well as the encouragement award from the 2014 Gerda Lissner International Vocal Competition and first prize in the 2014 Giargiari Bel Canto Competition. In short, André Courville is quickly establishing himself as one of America’s foremost young singers, having garnered warm attention for his Carnegie Hall debut in the Opera Orchestra of New York’s acclaimed production of Roberto Devereux, and in performances with the Caramoor International Music Festival as Monterone in Rigoletto. Last season he made his debut with the prestigious Santa Fe Opera as a member of its heralded Apprentice Singer Program. Currently, the busy bass-baritone is completing a second year of studies and performances here in Philadelphia at the renowned Academy of Vocal Arts. Upcoming engagements with AVA include Mustafà in L’italiana in Algeri, Colline in La bohème, and Méphistophélès in Faust. And on March 29 and April 3, André will make his VoxAmaDeus debut as the bass soloist in Johann Sebastian Bach’s monumental Mass in B Minor, under the baton of Maestro Valentin Radu.


VoxAmaDeus’ correspondent caught up with André Courville between back-to-back rehearsals at AVA, and I expect that you, Dear Reader, will be as impressed as was I by the wonderful story he related, including the fact that he is a triple threat—operatic basso, organist and conductor!

I hail from the southern, central Louisiana town of Cecilia (which, legend has it, was named for the town’s first postmistress!). When I was about eight, I began to study both the piano and the organ.  Maybe four years later, when I was 12, I got my first church job—directing the choir. Naturally enough, I began to focus on playing the organ.  About four years after that, when I was in high school, a Russian opera company came to the nearby city of Lafayette, a bit south of Cecilia. They performed Donizetti’s Lucia di Lammermoor. I was sold! The opera bug bit me when I was 16!

I went to college on scholarship at Loyola University New Orleans to study vocal music and was there during the infamous Hurricane Katrina of August 2005. But after graduation I decided to take a break from singing and came up north to be the organist and choir director of Philadelphia’s First Baptist Church. I worked there for about a year before returning home to work as organist and choir director in Lafayette, Louisiana. The church had a sizeable music program and a concert series to organize and perform in.

However, I could not get out of my system a very strong desire to sing. During my year at Center City Philadelphia’s First Baptist Church, I had gotten to meet several Academy of Vocal Arts singers. So I auditioned and in 2013 began to study at AVA. I am presently completing my second year and am now 28 years old.

I aspire to build a career in Europe and believe that my voice is most adept in the highly melodic bel canto roles.


[Editor’s Note: Bel canto literally means “beautiful song” in Italian. In the most general of terms, it applies to the highly lyrical music that was composed by Rossini, Donizetti, Bellini and others, and is often discussed in contradistinction to the more declamatory, high-amplitude and/or more heroic music of Verdi, Wagner and others. The 1909 edition of Elson’s Pocket Music Dictionary states, “…it means a tender, pure, and sympathetic legato, the opposite of bravura singing.”]

As a church music organist and choir director, singing J.S. Bach’s B-minor Mass has immense appeal to me. So I am especially looking forward to my debut with Maestro Valentin Radu and the Ama Deus Ensemble. Every organist begins his/her serious studies with Bach! And performing with an ensemble that uses Baroque period instruments is very exciting. Also, this will be my first experience singing a half step down.


[Editor’s extended note: The standard modern concert tuning pitch is A = 440 cycles per second. It is typically blown by an orchestra’s oboe. 440 refers to the number of cycles per second at which that specific tone vibrates. However, the actual pitch of A has changed throughout history, and in fact is still mutating upward in certain cities! In the past, A was lower than it is today. So when the concertmaster has the Ama Deus Ensemble orchestra tune before the B-minor Mass, the artists will tune to an A of 415 cycles per second. This is about one half step lower than A-440. Among the several things lowered tuning does, putting less stress on the instruments and voices is one of its attributes.]


The two arias that Bach wrote for the bass soloist are gratifyingly challenging works of art. I have been enjoying accompanying myself at the piano, sight-transposing down a half step, so that I can be prepared for rehearsing with the orchestra and, of course, singing the two performances.

The arias are vocally and artistically very difficult, for as is well known, Bach treated the voice as if it were another mechanical instrument. The melody ranges go up and down, the phrases are extremely long, and there are few places to get a really good breath. In general, Bach’s music is technically very challenging. But it is fun to sing and very rewarding. I am very grateful that Maestro Radu and VoxAmaDeus have given me this opportunity.
at 1:32 PM
Share
‹
›
Home
View web version